Art under quarantine. A look from a Franek winter

It has turned out that the coronavirus crisis and art are not very compatible. Culture got hit unexpectedly and it was painful for some. Private institutions budgeting themselves or with business support were the first to feel it. There are examples of closed-down galleries and reduced artistic initiatives. Many have reallocated the money to cover their medical and sanitary needs. It is logical in a situation of uncertainty and waiting.

At the same time, there are many of those who remind us that the times of crisis are crucial to history. Just as they are for art.

For example, in Ivano-Frankivsk, no institution announced closure, but an erratic work schedule, restrictive measures with regard to the number of visitors and operating conditions have led to a sharp decline in attendance at exhibitions, concerts, presentations. On the one hand, the spectators protected themselves from possible risks, yet on the other hand, the institutions were increasingly insecure about advertising their activities, fearing to violate the restrictions and end up getting fined.

Only the Art Museum of Prykarpattia applied for a grant from Ukrainian Cultural Foundation for institutional support during the pandemic. According to director Vasyl Romanets, this institution’s attendance has decreased significantly. The museum is trying to recuperate by increasing its presence on social networks. So far not too successfully or professionally. Short videos about a new attribution of a work of art from their collection or religious holiday greetings sound like fragile reminders of their existence. The museum’s exhibition program has not changed either, it seems not to exist as such.

How the sphere of culture is accommodating and what is driving it during the pandemic. Ukrainian and European Experience

A similar situation is observed with the Regional Museum of Local Lore. They exhibit everything offered either by painters, mostly amateurs, or by the institutions from other cities, arranging traveling exhibitions. Every now and then, the air of amateurism is saved by Valeriy Tverdokhlib , the museum’s chief restorer, presenting the results of his work and attention to sacred art, including the albums “Let us save the treasures together”.

As evidenced by its catalogs, the Borys Voznytsky Lviv National Art Gallery robustly conducts both scholarly research and promotional exhibition activities (“Lviv sculptors and the sculptors of 18th century Lviv”, “The workshop and students of the Koprovskyi painters”, “Portraits of knights and ladies of the Order of the Golden Fleece” “Osyp Sorokhtey “, or “Vlada Ralko “, “Volodymyr Budnikov “, “Oleksandr Roitburd”, “Yuriy Syvyryn “), which can serve as an example of organizing museum work well. And the plans to create and open the Museum of Modernism speaks well of their ambitions. 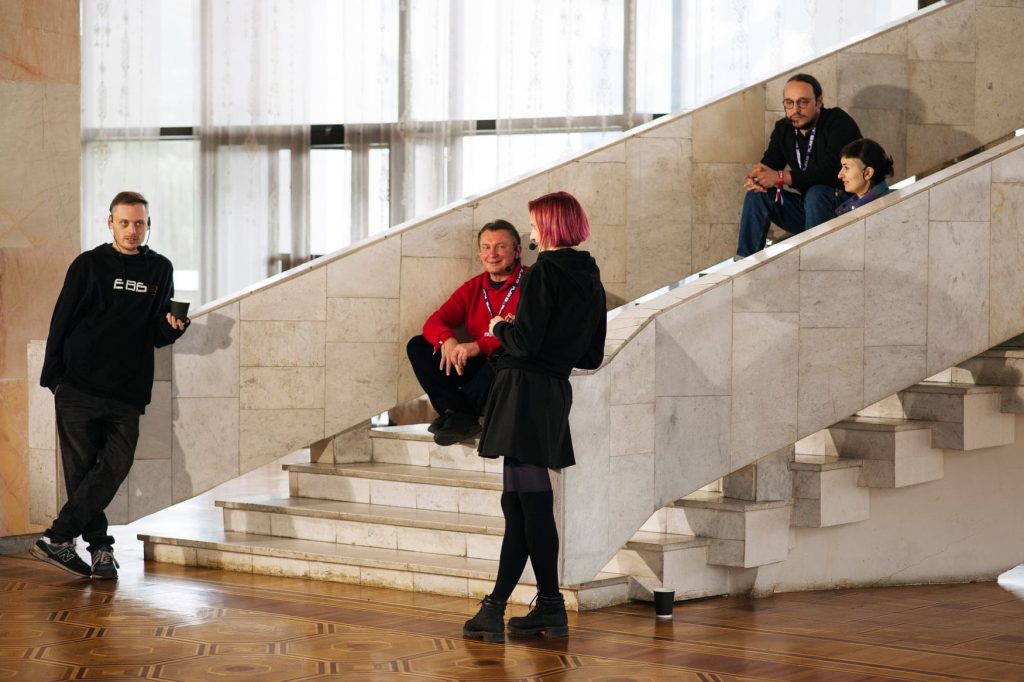 The activities of UCF, an important donor in supporting and developing culture, become significant and meaningful in the field of culture. The projects implemented with the Foundation’s financial support often become the vector of the development of regional cultural policy. This year, the following two events were held in Frankivsk: Mezha, a “pereberii” festival,  and Plan B, an online social innovations and new music festival. While the former turned to the city’s history and suggested immersion in a carnival atmosphere (“pereberiia” means “disguising”), where the protagonist was a children’s fairy-tale character and the costumes were supplied by the city’s puppet theater, and where mostly folk music from nearby villages was played and one could taste the local cheese and liqueurs, thus embracing a rustic culture, the latter addressed what is the most recent and fashionable. The event brought three cities together online – Ivano-Frankivsk, Kharkiv and Lysychansk, and in addition to the theoretical part speaking about music, social startups, and art, it included concerts of electronic music and video jockeying.

“Each city demonstrated what local culture lives on and what global issues are of concern to the local community. The festival’s main goal is to show the current initiatives and people creating change, unite them in their desire to do important projects, show the country the cultural peculiarities of different cities. “

Two polar approaches to the topicality of this issue demonstrated the extremes of perceiving and implementing traditions and innovations in a particular city. If Mezha took place at the initiative and on the territory of the municipal enterprise Palats with the support of the city authorities, Plan B used the city facilities, a regional theater, and the Locomotive Repair Plant as part of the activities of Other Education NGO and the Detali music formation.

During the quarantine, some institutions further deepened their scholarly work conducting new research, some spent time on rebranding and updating their visual design. Repairs and renovations were the right thing to do, conditions and financial situation permitting. One could develop online educational or excursion courses, translate their materials into foreign languages. Some worked to improve their institution’s website content.

The main conclusion is dictated today by the events related to the coronavirus – the institutions should be digitized.

Art is increasingly mastering and penetrating digital technology. And vice versa. Distance, remoteness, monitor or TV, recording or broadcasting a conversation with an important and interesting person online, high-quality scans with fragments and comments, 3D tours through the halls is just a short list of what could be implemented during the quarantine to attract a wider range of those interested.

Vagabundo‘s program laxity makes it possible to do, show, present everything that is not prohibited by law and justified by the rules of the “Underground passage”. More precisely, by the lack thereof. It is possible that one day such a policy could lead to clear and high-quality results. The Assortment Room Gallery has recently been trying to gain more attention by holding film screenings on a regular basis, or occasional lectures. After a short vacation, the Detector gallery is again a participant in the city’s grant programs trying to make the exhibition activities stable, which should strengthen the institutional capacity. These institutions’ event advertising can be periodically  seen on social networks and sometimes on city light posters. Other institutions, such as the regional branch of the Artist Union, the municipal CAC, or the Art on the Wall gallery at the Bastion shopping center are still operating in a semi-guerrilla mode, and it is either impossible or not interesting to learn about their activities. 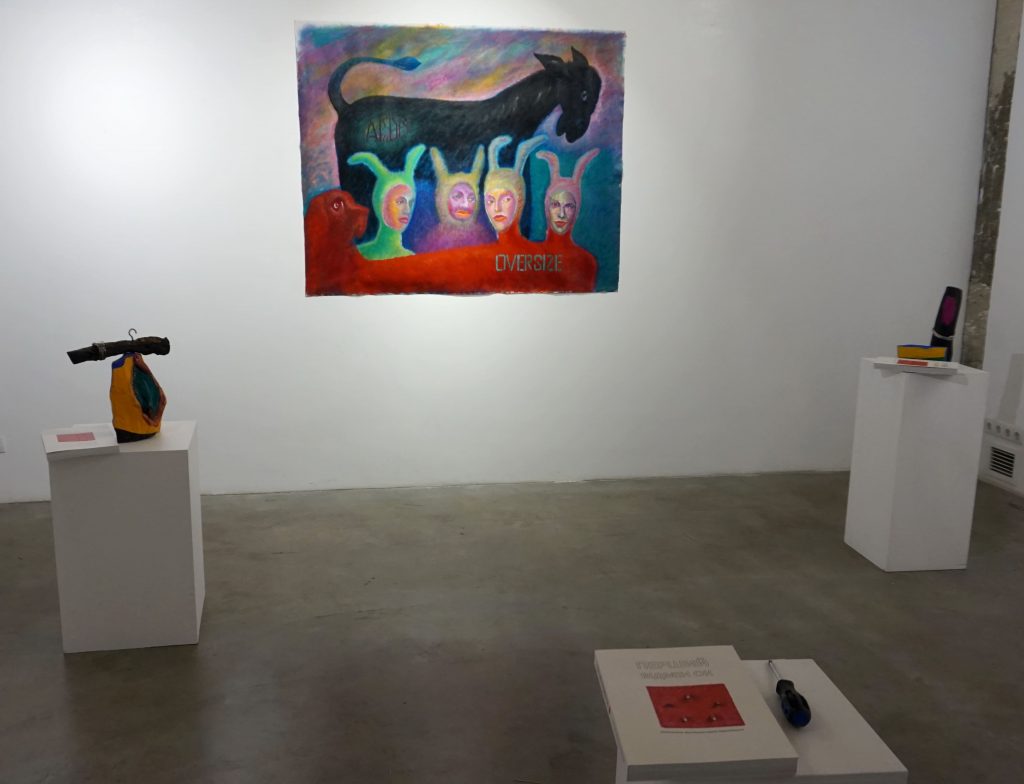 If such an iconic and influential institution as Port Creative Hub, an art platform whose activities in the capital  spanned five years has ceased to exist, it is very gratifying to see a new player in the field of culture – the Lviv Municipal Art Center. The young team’s ambition and the city authorities’ willingness to increase attention to art initiatives will create a healthy, competitive atmosphere in the city, promoting contemporary culture and undoubtedly  increasing its impact on city life. Along with such “monsters” as Dzyha or Pavlo Hudimov’s I Gallery or “youth rowdyism” like the Hanhrena gallery or the conservative Icon Art, Zelena Kanapa and the “museum of ideas” of LYAC could become a program initiator for cultural development not only in the city, but also across the region. The situation in Lviv is somewhat reminiscent of this city’s active artistic life centuries ago.

Kharkiv got attention for holding online the 2020 Kharkiv Photo Forum and publishing several important books about the Kharkiv School of Photography, as initiated by the Kharkiv Photography Museum. In Odesa, the Odesa Fine Arts Museum and the Odesa Museum of Modern Art have kept their exhibition pace.

The Korsak Museum of Contemporary Ukrainian Art of Lutsk even held several campaigning exhibitions, providing the artists with an opportunity to reflect on the pandemic. The museum’s founder, Viktor Korsak, a physician by education and a collector by passion, is aware of the importance of artistic understanding of humanity’s problems of today. The Anticipation + Immunity project brought together over 300 works created during the quarantine by 180 artists from 6 countries. The artists living in Ukraine, Russia, Germany, India, Austria, and the UK expressed their fears and hopes in their works during the first wave of coronavirus-related restrictions. Another campaign by the museum is an exhibition of works by Emma Andiyevska, traveling through the museums of Ukraine. Is it not a good way to show the museum’s collection of works to others while promoting their own activities?

When it was forbidden to visit cultural institutions, the Ivano-Frankivsk Theater started to go around staging open-air performances.

Standing out as exceptions, these isolated, positive examples demonstrate the cultural institutions’ reluctance not just to survive in difficult conditions, but also seek and find a way out by introducing other, non-standard modes of work and attracting attention to it. What is still referred to as the “cultural departments” not only slow down these processes, but also sometimes give the impression of supporting inaction and lack of initiative on the part of the institutions supervised by them.

“The cultural community believed they were used to a state of turbulence and to the fact that this area was unstable and complex. However, they still relaxed at some point. So, quarantine made us be more active, it encouraged us, odd as this may sound. Now I understand that it was for the better, but when the pandemic broke out, everyone was scared. Many organizations had to deal with the very question of survival; the others were forced to re-think their usual formats. Quarantine and its economic consequences have transformed the approach to social business and its organization,” said Katya Taylor , an art expert and founder of Port.Agency.

Will there be art after the pandemic? Definitely so, just like life goes on despite the diagnoses.

Member of the Supervisory Board of Souspilnist Foundation